Abstract: Developing methods to search over an encrypted database (EDB) have received a lot of attention in the last few years. Among them, order-revealing encryption (OREnc) and order-preserving encryption (OPEnc) are the core parts in the case of range queries. Recently, some ideally-secure OPEnc schemes whose ciphertexts reveal no additional information beyond the order of the underlying plaintexts have been proposed. However, these schemes either require a large round complexity or a large persistent client-side storage of size O(n) where n denotes the number of encrypted items stored in EDB. In this work, we propose a new construction of an efficient OPEnc scheme based on an OREnc scheme. Security of our construction inherits the security of the underlying OREnc scheme. Moreover, we also show that the construction of a non-interactive ideally-secure OPEnc scheme with a constant client-side storage is theoretically possible from our construction.

One of promising solutions to protect the confidentiality of sensitive data is to use property-preserving encryption schemes which preserve some property of plaintexts, then perform query evaluation over the encrypted database (EDB). Supporting efficient operations on EDB such as sorting and range queries, order-preserving encryption (OPEnc) [1,2] and order-revealing encryption (OREnc) [3-5] have been proposed.

OREnc is a special type of symmetric encryptions which leaks the order of the underlying plaintexts through a publicly computable comparison function. Recently, Boneh et al. [5] proposed the first stateless and non-interactive OREnc scheme which achieves the ideal security. However, their OREnc scheme relies on multilinear maps requiring heavy computation and strong assumption, also suffering from security analysis [6,7], thus is not efficiently implementable today. Chenette et al. [3] proposed the first efficiently-implementable OREnc scheme based on a pseudo-random function. They also provided a new security model that precisely quantifies what information of plaintexts is leaked. Later, Lewi and Wu [4] proposed a new OREnc scheme with reduced leakage as compared to [3].

OPEnc is a special case of OREnc whose ciphertexts have the same order as their plaintexts, thus it enables a server to get the same results as if it had operated on plaintexts without any modification on DBMS. It has been known that any immutable ideally-secure OPEnc schemes must have the exponentially large ciphertext space. Recently, some interactive and mutable order-preserving encryption (or encoding) schemes with the ideal security have been proposed. Kerschbaum [1] proposed the first frequency-hiding OPEnc scheme that randomizes the ciphertexts to hide the frequency of the underlying plaintexts. Recently, Roche et al. [2] gave a partial order-preserving encryption (POPEnc) scheme that is mainly for the application scenarios where a large number of insertions and a moderate number of range queries, and achieves even stronger security compare to [1]. However, these ideally-secure OPEnc schemes either suffer from a large round and client-side storage complexities or incomplete functionalities, as described in Table 1.

In this work, we propose a possible answer to the following question: Is it possible to design a noninteractive ideally-secure OPEnc with a constant-size client storage?

More specifically, we present how to improve the round and client-side storage complexities on the exiting ideally-secure mutable order-preserving encryption protocol using the public comparison functionality of an OREnc scheme. By composing our method with an existing OREnc scheme, we can obtain an efficient OPEnc scheme which security is at least as strong as one of the underlying OREnc scheme. Table 1 presents comparison our constructions based on [3-5] with the existing ideally-secure OPEnc schemes in terms of efficiency and security. Composing with [3,4], the resulting constructions show better efficiency both of the number of rounds and the client-side storage, but cannot guarantee the ideal security. Note that the construction based on [5] is the first non-interactive ideally-secure OPEnc scheme with a constant-size client storage, but it is currently impractical to implement as described before.

The rest paper is organized as follows: Section 2 reviews the formal notion and security of OREnc (OPEnc). In Section 3, we propose our new construction of OPEnc based on OREnc. In Section 4, we analyze our construction. Section 5 concludes this paper.

An order-preserving encryption scheme OREnc consists of the following two algorithms (OPEnc.Setup, OPEnc.Encrypt) defined over a well-ordered domain D and a range R.

As described above, these two schemes don’t contain a decryption algorithm, but the following two options can be applied. Note that the secret key holder can generate a ciphertext ctx of any messages he choose, and he can also verify the output of OREnc.Compare [TeX:] $$\left(c t x, c t x^{\star}\right) \text { where } c t x^{\star}$$ is the target ciphertext. Thus, he can decrypt [TeX:] $$c t x^{*}$$ by performing the binary search. Another method which avoids the logarithmic scale binary search overhead is combining with a CPA-secure encryption scheme, i.e., inserting an encryption of the same message under this symmetric encryption scheme together. Note that this additional ciphertext doesn’t reveal any information about the underlying plaintext due to the CPA security.

In this section, we review a simulation-based security model [3] of OREnc that precisely quantifies what information of plaintexts is leaked as defining a leakage function. We denote an adversary and a simulator for some [TeX:] $$q=\operatorname{poly}(\lambda) \text { by } A d v=\left(A_{1}, \ldots, A_{q}\right) \text { and } \operatorname{sim}=\left(S_{0}, \ldots, S_{q}\right), \text { respectively. }$$ OREnc = (OREnc.Setup, OREnc.Encrypt, OREnc.Compare) be an OREnc scheme, and Lkg(·) denotes a leakage function of OREnc. For a security parameter , the experiment is defined as follow:

We say that OREnc is a secure with Lkg(·) if for all poly-size adversaries Adv, there exists a simulator Sim such that the two distributions [TeX:] $$R E A L_{A}^{\Pi}(\lambda) \text { and } S I M_{S}^{\Pi}(\lambda)$$ are computationally indistinguishable. From the security notion, we also say that OREnc is a ideally-secure if the leakage function Lkg(·) reveals only the relative order of the underlying plaintexts. Note that we can apply the same experiment to an OPEnc scheme since it can be seen as a special case of OREnc.

In this section, we analyze our construction in terms of correctness and security.

Proof. We write [TeX:] $$L_{\mathrm{OPEnc}}(\cdot) \text { and } L_{\mathrm{ORFnc}}(\cdot)$$ to the leakage functions of our proposed OPEnc scheme and the underlying OREnc scheme, respectively. As described before, the generation and updating methods of [TeX:] $$c t x_{0}$$ can be seen as the non-frequency hiding construction of [1], and it has been known to be ideally secure. This means that the first part of the resulting ciphertext [TeX:] $$c_{0}$$ reveals only the relative ordering of the underlying plaintext. Therefore, a simulator Sim with [TeX:] $$L_{\mathrm{ORFnc}}(\cdot)$$ who can simulates [TeX:] $$c t x_{1}$$ is always able to simulate [TeX:] $$c t x_{0}$$ unless the underlying OREnc scheme provides more strong security than the ideal security.

THEOREM 3. (Efficiency) Our proposed OPEnc scheme provides a non-interactive encryption and a range query with a constant client-side storage.

Proof. From the specification of Algorithm 1, we know that it doesn’t require any additional rounds to encrypt data with a server. The client simply creates [TeX:] $$c t x_{1},$$ then sends it to the server. The rest of the encryption part is done by the server. Although we have not described in detail how the range query works, it is basically done by sending two encrypted boundary points to the server. It means that range query also does not require any additional rounds.

The client should maintain the secret key skey of the OREnc scheme to generate [TeX:] $$c t x_{1}.$$ Since the computation of [TeX:] $$c t x 0,$$ which requires all of the existing ciphertext information, is performed on the serverside, the client does not need to maintain any additional state except skey.

REMARKS 1. One of the interesting points of our proposed scheme is that the client and the server each compute half of the ciphertext. Some sensitive readers might think that it is not natural that the server who does not have a secret key generates the final ciphertext. However, this has no effect on functionalities of OPEnc such as decryption and range queries, and also no effect on the security since the part of ciphertext generated by the server is computed using only the information that has been already disclosed.

REMARKS 2. The ciphertext of our proposed OPEnc scheme consists of two ciphertexts of OPEnc and OREnc. This means that each OPEnc and OREnc encryption algorithms have to be performed to generate the ciphertext, thus it can be think that it requires roughly more than twice computational overhead compared to previous works. However, we know that the client generates only half of the ciphertext, and the server who has powerful computation power completes the encryption process, thus it is hard to say that efficiency of our proposed scheme is worse than the existing OPEnc schemes.

This work was supported by research grants from Daegu Catholic University in 2019. 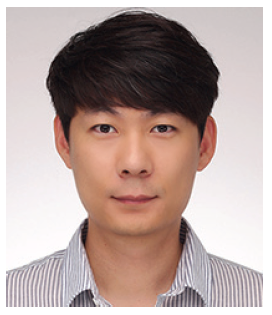 He received M.S. and Ph.D. degrees in Graduate School of Information Security from Korea University, Seoul, Korea, in 2011 and 2015, respectively. He is currently an assistant professor at School of Information Technology Engineering, Daegu Catholic University, Korea. His research interests focus on cryptography, database security, privacy enhancing technology, and secure protocols.